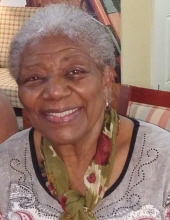 Marjorie B. Pugh was born on March 21, 1934 in Bellville, Texas, the fourth of five children born to Nettie and Ira Blackman. She was married 46 years to James Henry Pugh, who proceeded her in death in May 2003. Marjorie graduated from Huston-Tillotson College (now University), with a B.A in History; with a concentration in Secondary Education in 1960. While attending Huston-Tillotson, she became a member of Delta Sigma Theta Sorority, Inc. After graduating from college and supporting her military husband, the family settled in Colorado Springs, Colorado after his retirement from the service in 1973. Marjorie taught junior high school until her retirement from District 11 of Colorado Springs, Colorado in June 1999. Prior to retirement, she completed her Master’s Degree in Counseling from Prairie View A&M University in 1996. Following her husband’s death in 2003, Marjorie moved from Colorado Springs, Colorado where she was a devoted servant in her church’s Sunday school, BTU, choir, and superintendent for Trinity Baptist Church for over 15 years. Her move to San Antonio was in August 2004, where she moved her church membership to True Vine Baptist Church. Marjorie loved the Lord and would keep busy with God’s work. Her passion for service lead to her becoming an active member for the Care and Visitation Team, Sunday school, and bible study while at True Vine Baptist Church. Marjorie was often known to encouraged those around her by her walk and devotion to Christian morals. Two of Marjorie’s most memorable travels in her later years included a missionary trip to Nairobi, Kenya in 2005 and a spiritual pilgrimage to Israel with a small church group from True Vine, led by Rev. Bruce Proctor in February 2014. After her diagnosis of Alzheimer’s in December 2014, she was moved to Austin, Texas. She then moved back to San Antonio after four years in Austin, due to a decline in her health in March 2019. Marjorie passed from mortality to immortality on Tuesday, August 27, 2019. She leaves to mourn her only surviving baby sister, Barbara Jean Fromayan, of Golden Valley, Minnesota; her children: Anitra L. Reed, of San Antonio, Texas; Deitra R. Morris, of St. Petersburg, Florida; Christal M. Kates, James S. Pugh, and Deani V. Flemmings, all of Austin, Texas; Helga Verwray Scott, of Atlanta, Georgia; as well as a host of nieces, nephews, 16 grandchildren, 7 greatgrandchildren, relatives and special friends.