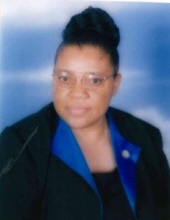 Mercedes M. Shelvin Hysaw was born June 7, 1954 in La Fayette, Louisiana. She entered into eternal rest Wednesday, August 18, 2021. Mercedes was the first child born to the union of Audrey Mae Thomas Shelvin and Junuis Shelvin, both preceded her in death, as well as her youngest brother Charles Ray Shelvin. Mercedes attended public schools in Opelousas, Louisiana. She graduated from Opelousas High School in 1972, where she was an avid participant in Track and Field. She continued her Educational studies at Southern University in Baton Rouge, Louisiana. Mercedes received her Bachelor of Science Degree in Library Science and Elementary Education from Southern University in 1978. While attending Southern University, Mercedes met and married William E. Hysaw. To this union, two children were born, Martai Shawn Hysaw, and Jaila Denae Hysaw Patrick. Mercedes started her walk with the Lord at an early age at the Holy Ghost Catholic Church in Opelousas, Louisiana and continued her walk as an active member of Highland Hills Seventh day Adventist Church. She thoroughly enjoyed the Seventh Day Adventist teachings, including the Revelation Seminars and the Sabbath School classes. She also loved working with the children as she coordinated the Vacation Bible School Program. She would also take VBS into the community. She would spend an entire year planning for the next Vacation Bible School. Mercedes enjoyed spending time with her family (sisters and brothers) in Houston, Texas and also her family in Louisiana where she could reminisce, talk about old times, and discuss what was on the menu. Mercedes moved to San Antonio, Texas in 1978 where she started her career in the Southside Independent School District as the Librarian for Pearce Elementary School. Later on she became the Library Coordinator for the entire School District. Along the way, she was selected as Teacher of the Year of Pearce Elementary School. She dedicated her time and service to Southside ISD for more than 20 years, before moving on to help start Kirby Adult Day Care, Inc. where she loved helping and working with the adult population with special needs. Mercedes was such a wonderful person who displayed kindness , considerateness, class, graciousness, and generosity. She was an incredible sister, wife, teacher, mother, grandmother, and friend who inspired all who knew her. She was truly an inspiration as her memory will live on in our hearts forever. She leaves to forever cherish her memories William E. Hysaw, Martai Shawn Hysaw, Jaila Denae Hysaw Patrick (Charles), one grandson: Chase Patrick, two granddaugthers: Cayla Patrick and Jayla Patrick, six sisters: Theresa Shelvin (Michael) of Melville, La., Mary Ann Shelvin of Houston, Texas, Mary Jane Shelvin Carey (Raymond) of Houston, Texas, Evangela Shelvin Laws (Lacy Sr) of Houston Texas, Deloris Thomas of Houston, Texas, Olita Thomas of Houston, Texas, one brother; Donald Ray Shelvin Sr. (Doranesia) of Humble, Texas, and a host of other relatives, family and friends