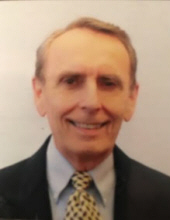 Robert (Bob) Eugene Lang,75, passed away at home on Friday, April 26, 2019 in San Antonio, Texas. Bob was born in Cleveland, Ohio and eventually made his way to Texas by way of a long military career that took him from Ohio to Washington DC to Korea and finally to San Antonio. As a young boy, Bob worked in a dairy and had a paper route. During junior and senior high school, he participated in skating competitions, was a member of the National Honor Society and joined ROTC in college. After graduating from Ohio State University in 1965 and obtaining his Doctor of Jurisprudence from the University of Akron Law School in 1970, Bob served in the Army from 1970-1971 and then, after deciding private practice was not his cup of tea, he reenlisted in the Air Force and served from 1972-1992, reaching the rank of Lt. Colonel. After retiring in 1992, Bob was hired as a Hearing Officer for the State of Texas Worker’s Compensation Commission (TWCC), where he decided contested case hearings. During the early years working for TWCC, Bob traveled the State as a traveling hearing officer, and he often said that it was the best job he ever had. After TWCC merged with the Texas Department of Insurance and prior to his retirement in 2011, TWCC Bob was promoted first to Regional Team Supervisor of Hearings/ Proceedings, then Appeals Panel Manager/Judge and finally Deputy Commissioner for Hearings. However, Bob’s life wasn’t just filled with facts, and rules and left-brained lawyerly things. There was a spiritual, artistic and altruistic right-brained side to Bob Lang as well. As he was contemplating leaving the military and deciding what the next part of his life would look like, Bob began to dabble a little with meditation. He began to read a lot of spiritual and religious books, both ancient tomes and modern age. The more he read and studied, the more passionate about his journey he became. Bob completed a year-long study of the Course in Miracles and attended meditation retreats and workshops of various kinds. More than anything, he was a student and a searcher of truths, which he continued to pursue rigorously until his passing. In addition to his spiritual journey, Bob turned his long ago love of skating into a love of dancing. He took lessons from instructors all around the state as he traveled for work, and also attended and eventually participated in dance competitions. It was his newfound love of dancing which led him to meeting Karen, who would become his wife in 1998. Last, and probably the most meaningful for those who knew Bob, was his generosity and loyalty. Bob was selfless in order to be incredibly generous and giving to others. He hated to receive presents for, or even acknowledgement of, his birthday. He rarely asked anyone for favors. His generosity to others ran the gamut from always paying for dinners out, or arranging for a weekend getaway at the Port Aransas condo for friends in need of a respite, to preparing wills, powers of attorney and deed transfers to insure that others would be prepared for the unexpected. Almost everyone who knew Bob could talk about at least one instance or story of Bob’s altruism, if not more. Bob volunteered with Hospice to play cards, read or just sit and visit with folks who, nearing the end of their lives, had no one else or to provide a needed break for their families. And while Bob had no biological children of his own, it is a testament to who he was that two young women considered him Dad and 4 children called him Grandad. From inventing silly games to play, like booties on the footies, fight on the bed, rubber band shoot-out, elevator elevator, or foot cushion volleyball, to teaching a 13 year old about the stock market, and instilling values such as fair play and gamesmanship when playing board games with 7 year olds, Bob’s love for them shone through. Robert Eugene Lang was born on May 13, 1943 in Cleveland, Ohio. He is predeceased by his parents, Eugene Albert Lang and Mabel Lillian Lang (Stoll), and by his brother, Wilbur Stoll Lang. He is survived by his wife of 21 years, Karen; step-daughters, Amy Jurewicz (Chris D’Amura) and Audrey Harig (J.R. Harig II); grandchildren, Luke Jurewicz, Gillian Jurewicz, Tripp Harig, Landon Harig, Ethan D’Amura, Cole D’Amura and Lucy D’Amura; sister-in-law, Dorothy Lang; niece, Karen Lang Smith (Tommy); nephews, David Lang (Lori) and John Lang (Debra Olson); great niece, Kacie Lang; great-nephews, Ryan Lang and Armwell Lang; former wife, Carol Lang; numerous friends and colleagues. In lieu of flowers, please make a donation in Bob’s memory to the National Hospice Foundation or to your favorite charitable organization.