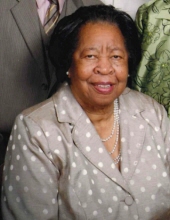 Bobbie Jean Gray was born on January 19, 1934 in Wharton, Texas to Cornelius Gray and Mable Holmes Gray. Bobbie was one of four children born to this union. Bobbie was baptized at St. Stephens Baptist Church under the leadership of Rev. B.B. Steward. She received her formal education in the San Antonio Independent School District. Following high school she married Melvin Thompson and to this union a son, Wallace was born. She also obtained her cosmetology license and worked in this field until she retired. Bobbie became a member of Huntleigh Park Baptist Church under the leadership of Rev. Johnny Guyton and later attended Antioch Missionary Baptist Church under the leadership of Rev. Dr. Kenneth R. Kemp until her health declined. Bobbie was preceded in death by her parents, Cornelius and Mable Gray; her brother, Sylvester Gray and her only child, Wallace Thompson. She leaves to cherish her memory and celebrate her life her brother, Cornelius W. Gray; sister, Frankie Gray; nieces, Brenda Boulware, Meoshameka Taylor and Yasmine Ataee along with other loving family members and close friends.