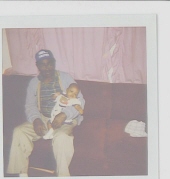 Cornelious J. Roy was the seventh child of Willie Roy, Sr., and Ophelia Hopkins Roy. He was born in the Hopkinsville Community on January 24, 1919. His early education was at Hopkinsville School, which was founded by his grandfather, Henry Hopkins. Later he attended Daule High School in Cuero. He confessed his belief in Christ at an eary age and became a member of Antioch Baptist Church which his grandfather, Henry Hopkins organized. He and his family were faithful member of Antioch Baptist Church for many years. He enlisted in the U.S. Army at the age of 22 receiving several awards such as: 3 Bronze Stars, Good Conduct Medal, Victory Ribbon, 1 service stripe and 5 overseas Service Bars. He was loved by many and most who knew him called him Uncle Nealy, even his sister and brothers called him Nealy. He met Willie Virginia Linzy and they were married October 1, 1947. He was a devoted husband and father. Cornelius J. H. Roy passed away on March 24, 2005 and leaves to cherish his memory 1 daughter, Virginia M. Roy Smothers and husband Jerry Smothers; stepdaughter, Theresa Young Barber and husband Larry Barber; Step granddaughter, Shaundra G. Lamkin and grandson, Byrone R. Edwards; great grandsons, Byrone R. Edwards, Jr., Deandre Alexander, Juron J. Edwards, Michael Alexander and one great granddaughter, Deyzaun Edwards, along with a host of neices, nephews and friends. To leave a note for the family, go to meadowlawn.net and Select Obituaries. Arrangements by Meadowlawn Crematory and American Mortuary.