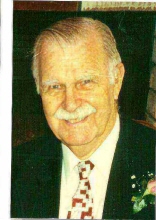 Donald J. MacEachin, age 91, born June 7, 1914 in Battle Creek, Michigan went to be with the Lord, Sunday, November 20, 2005 at home surrounded by his family. He was preceded in death by his beloved wife of 61 years, Mae E. MacEachin. He was the son of Roy and Iva MacEachin and had one sister. He is survived by his son Douglas J. MacEachin and wife Olga, his daughter Mary E. Lehman and husband Joe, his daughter Janet M. Wagstaff and husband Jim, seven grandchildren and nine great grandchildren. From 1939-1964 Don resided in Port Huron, Michigan where is operated his own business. He was actively involved in Kiwanis, and served as Lt. Governor of the Michigan Kiwanis Club. He also served as President of the Port Huron Little League and was instrumental in the building of a multi-diamond little league park. In 1964, he relocated to San Antonio, Texas where he received a Bachelor's Degree in Economics in 1967 from Trinity University followed by a Master's Degree from Baylor University in Waco, Texas. He then moved to Mobile, Alabama and taught at the University of South Alabama for 13 years. Upon retirement from teaching, he and his wife returned to San Antonio in 1981. Don did volunteer work with SCORE for over 30 years at his various residences. Don was a member of University Presbyterian Church, 300 Bushnell, where a Memorial Service will be held Saturday afternoon, December 10th, 2:00P.M. The family requests that in lieu of flowers, memorial contributions be made to Odyssey HealthCare of San Antonio, 4415 Piedras Drive West, Suite 205, San Antonio, Texas 78228