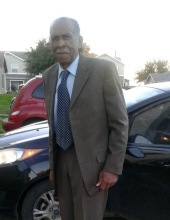 Eugene Glasco was born November 10,1950 to his loving parents, James and Mildred Jewel Glasco in San Antonio, Texas. He was the fifth child that the couple were blessed with during their lifelong union. Gene was given the nickname Genie Baby which the family called him for years until eventually it dropped to Gene. Gene was baptized by the late Rev. John J. Rector Sr. of Antioch Missionary Baptist Church as a child. Gene went to the public schools in San Antonio, graduating from Brackenridge High School in 1969. While there he excelled in football. As a young man he was quite the ladies man and was always dapper. He met lifelong friends as a child and cherished those friendships. Gene met and married Annette Taylor in 1992. He was a proud father of six sons and two daughters and a very proud Papa to his grandchildren and great-grandchildren. Gene was welcomed to heavenly home by his parents, James H. Glasco, Sr. and Mildred Jewel Glasco; siblings, Zelma and Ray; niece, Trai and nephew Eric. Gene leaves to cherish his memory; wife, Annette; children, Genya, Nekedira (Jude), Alton (Jalila), Vincent (Krysti), Xavier (Charlie Ann), Mark (Breana) and Shawn, Demetrius, 10 grandsons, 10 granddaughters and 9 great-grandchildren; siblings, James Jr, Wayne (Christie) and Patricia (Charlie); special nieces Toi, DeeDee and Syreeta and special friend Melanie along with a host of other nieces, nephews, cousins, extended family, and friends.