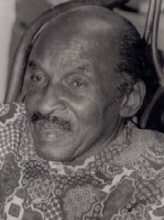 Ezekiel Johnson, age 87, of San Antonio passed away Friday, May 6, 2005. He was born in San Antonio, Texas to Daniel and Elizabeth Johnson on May 6, 1918. He united with New Light Baptist Church at an early age under the ministry of the late Rev. Dr. P.S. Wilkinson. Ezekiel was united in Holy Matrimony to Alene Wilson on March 8, 1940. Two children were born to this union. He later married Etta Mae Bell who preceded him in death. He was also preceded in death by one son, Lonnie and stepson, Charles Lee Newsome. He leaves to cherish his memory one brother, Adolph Johnson; two sons, Raymond and Ezekiel Jr.; step-daughter, Patricia Harvey; daughters-in-law, Mercedes Johnson, Janet and Grace Johnson; a host of grandchildren, great-grandchildren and other relatives and friends. We love him very much, but God loves him best. Blessed be the name of the Lord. To leave a note for the family, go to www.meadowlawn.net and Select Obituaries.