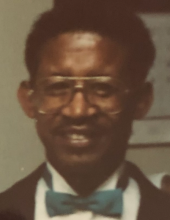 Howard Charles Brown, Sr. (affectionately known as ‘Papa’) was born January 1, 1940 in San Antonio, TX to the late Gilbert and Ludie Mae Brown. He was one of three children of which one sister, Essie Gilbert, preceded him in death. He was married to his former wife, Cecelia, for 35 years to which five children were born. Howard was a loving father, brother, grandfather, great-grandfather, and uncle who will be dearly missed by his family and friends. He graduated from St. Peter Claver High School and St. Phillip’s College with an Associate in Business Administration. He started with the U.S. Postal Service on February 27, 1965 as a Postal Clerk where he was employed for 35 years before retiring. Howard’s faithfulness in caring for his family was unwavering. He was a keen business man who lived by his values and beliefs. He was a talented golfer and spent numerous hours on the golf course. He won several tournaments and was a highly regarded competitor. He absolutely loved sports. His favorite teams were the San Antonio Spurs and Dallas Cowboys. He was also quite competitive when playing dominoes. He became a Christian at an early age. He was a devoted Deacon at Damascus Missionary Baptist Church and also served on the Finance Committee. He leaves to cherish his memory, four daughters, Debra Jefferson (Bryant), Cheryl Bacon (Gary), both of San Antonio, TX, Carolyn Coleman (Dewayne), of Fulshear, TX, Terri Govan (Jay Jr.), of San Antonio, TX, one son, Howard Brown, Jr. (Nicole), of Helotes, TX; four grandsons, Jacy Jefferson (Carla), of Las Vegas, NV, Jay III (Jessica), Brandon and Corey Govan; five granddaughters, Brandy Jefferson, Kenitra Lumpkin (Micheaux), of Killeen, TX, Darian Coleman, of Fulshear, TX, Treshayla and Bryshanna Brown, of Helotes, TX; one sister, Olva Mackey, of San Antonio, TX and nine great-grandchildren, a host of nieces, nephews, other relatives and close friends.