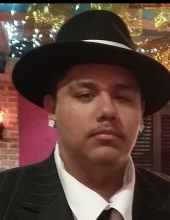 Michael Anthony Dominguez, known lovingly as “Big Mike”, gained his wings September 28, 2021. He was born in San Antonio, Texas to Paul Dominguez and Lydia Sanchez. The oldest of three, Michael always took on the role of being the protector in the family. Although his stature was intimidating to some, he was a gentle giant. Michael had a way of making everyone feel welcomed and loved. He always made sure to be there for anyone when they needed it the most and without judgement. He cared deeply about his peers and would give the shirt off his back if needed to help anyone. Michael was a wonderful and loving son and always made sure to let his family know how much he loved them by his actions and words. He was known for his fun, loving and cheerful ways which always brought a smile and laughter to those around him. Michael’s spirit will always be remembered by those whose lives he touched. Michael is preceded in death by his paternal grandparents, Pascual and Cruz Dominguez, and his maternal grandfather, Roy Sanchez. Left to cherish his memory are his loving parents, Paul Dominguez and Lydia Sanchez; brother, Jonathan Paul Dominguez; sister, Alexandria Marie Dominguez; girlfriend, Alycia Hernandez; maternal grandmother, Maria Sanchez; step grandfather Robert Bermudez, numerous aunts, uncles, cousins, extended family and friends.