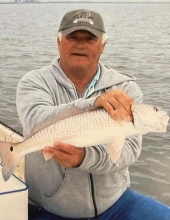 Michael Wayne Peddy “Mike” to family and friends, passed away peacefully on Saturday, September 25th in San Antonio, TX. He was born in Laredo, TX on December 19, 1944 to William Wayne and Thelma S Peddy. Mike attended Alamo Heights High School and proudly served in the U.S. Navy on the aircraft carrier USS Constellation from 1964 to 1966. He had a passion for dirt tracks, NASCAR, racing history and attending the Indianapolis 500 with family and friends. He was happiest spending time fishing on the Texas coast. Mike was preceded in death by his parents and loving wife of 32 years, Beverly Peddy. He is survived and will be deeply missed by his daughters, Sherri Rials and Carolann Lawson and husband, Ted; three grandchildren, Blake Lawson, Riley Lawson and Parker Rials; his brother Charles A. Peddy, and many friends. The Service with Military Honors will be held at 9:15 A.M. on Friday, October 22, 2021 at Fort Sam Houston National Cemetery Pavilion, 1520 Harry Wurzbach Rd., San Antonio, TX 78209. Michael will be interred alongside his wife Beverly.