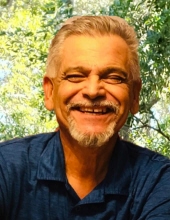 Richard G. Hinojosa, went to be with the Lord, peacefully, on March 31, 2021 at the young age of 65, with his family near his side. He was born in San Antonio, Texas to parents: Rafael and Rebecca Hinojosa on August 22, 1955. Richard grew up in San Antonio, and graduated from Thomas Jefferson High School in 1973. He met and married his high school sweetheart, Velia “Birdie”, where they shared a blissful union of 43 years. They began their family, and raised their sons, Jason and Nathan. Richard worked in carpentry since he was a young boy, and continued to pursue and master his craft as a carpenter. He worked with the San Antonio Independent School District, where he worked his way up to Foreman and retired after 25+ years. In his spare time, you could always find Richard enjoying time with his beloved granddaughters, Emily, Melanie, Jaylin, Jonelle and Ariah; or spending time in the outdoors where he enjoyed hunting and fishing. He will be forever cherished and remembered as a our “Super Hero” in our hearts. He was preceded in death by his father, Rafael Hinojosa. He is survived by his beloved wife, Velia “Birdie” H. Hinojosa, his sons, Jason Hinojosa, Nathan Hinojosa and his wife Jolene; his mother, Rebecca Hinojosa, his siblings: Ralph, Roy, Ronnie, Joe, Rachel, and Randy, and many other close relatives and friends. “FOR EVERYONE’S SAFETY, DUE TO COVID-19, A PRIVATE SERVICE WILL BE HELD FOR THE FAMILY ONLY. PLEASE SHARE YOUR PHOTOS AND MEMORIES VIRTUALLY ON THE MEADOWLAWN GUESTBOOK OR AT DEERHUNTERRICHARD55@GMAIL.COM.” In lieu of flowers, the family requests donations be made to the American Cancer Society at http://main.acsevents.org/goto/DeerHunterRichard To leave a note for the family, please visit the The guestbook at www.meadowlawn.net Arrangements with MeadowLawn Funeral Home 5611 E. Houston Street