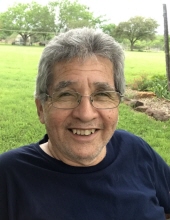 Robert Leopoldo Mendez was born to Jesse and Dora Mendez on January 9, 1944. He joined his Lord and Savior on December 12, 2021, the feast day of Our Lady of Guadalupe. We like to think the Blessed Virgin came, took him by the hand straight to the Lord. He lost his courageous battle with cancer, but he put up one good fight. His favorite saying was: “I fought hard, I ran the race, and I kept the faith”. Robert and his wife Nelrose of 23 years blended their families in 1998. He is survived by his daughter, Elizabeth McMahon (Robert); grandchildren, Matthew, Aidan and Colin; great-grandchildren, Ava, Ezra and Luca; daughter, Sandra Wiedner (Fred) and grandchildren, Xavier, Alexandria; son, Robert Mendez, Jr. (Marie) and grandchildren, Gage, Dominic and Nova; son, Michael Mendez (Destiny) and grandchildren, Mikayla and Juniper; daughter, Destiny Mendez and grandchildren, Mia, Mason and Emma; son-in-law, Alex Guajardo, II and grandchildren, Samantha and Alex, III; stepson, Kenneth Friend (Rebecca) and grandsons, Kaleb, Joshua and Luke; stepdaughter, Lisa Cooper (Matthew) and grandchildren, Collin, Denton and Erin. Robert is also survived by his brother, Henry Mendez (Dora); sister, Sylvia Ray; sister-in-law, Mary Mendez and numerous nieces and nephews. He is preceded in death by his parents, Jesse and Dora Mendez; brother, Frederick Mendez and his beloved daughter, Jacqueline Guajardo. Since 2004, Robert volunteered as a project manager at Santo Nino Catholic Church under the direction of three priest; Reverend Martin Parayno, Father Anthony Mendoza and Rev. Father Arnold Ibarra, PhD. He considered his second family the many members of Santo Nino Church who would help him with his projects anyway the could. The family has been flooded with prayers, novena masses, beautiful cards, visits and phone calls from multiple parishioners during his illness. The family is eternal grateful for such outpouring of love. Someone once said “Working for the Lord doesn’t pay much, but His retirement plan is out of this world”. So, we want to think that Robert is enjoying the Lord’s retirement plan Funeral & Burial: Thursday, December 16, 2021 at Santo Nino Catholic Church, the Holy Rosary will be said at 9:00AM followed by the Celebration of Life Mass at 10:00AM with Father Ibarra officiating. Burial will follow in String Prairie, Texas. In lieu of flowers, donations can be made to Santo Nino Catholic Church, 5655 Rigsby Ave., San Antonio, Texas 78222 or the charity of your choice.