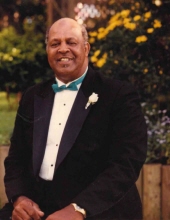 Joseph Edward McClain, Jr. went peacefully home to be with the Lord on November 15, 2020 after a prolonged illness. He was the son of the late Joseph Edward Sr. and Thelma McClain. He was born on January 22, 1939 in New Orleans, Louisiana. Upon graduation from High School, Joe, as he was known by friends and family, immediately joined the United States Air Force in service of his country. He completed his Basic Military Training at Lackland Air Force Base in San Antonio, Texas. From there, he went to Technical School to become a Supply Specialist. During the course of his Air Force career, he received numerous certifications, commendations and medals. The military granted him the opportunity to travel and he served stateside as well as overseas. He retired as a Technical Sergeant after 20 years of honorable service. After the military, Joe embarked upon s second career. He started his own trucking business under the banner of JEM Trucking. His entrepreneurial spirit expanded his business and he was the owner of two 18 wheelers. He travelled the country in his big rigs. Joe operated his business over the course of twenty plus years and everyone knows Joe had two speeds, slow and slower. Joe enjoyed barbequing and fancied himself a pit master. He loved Zydeco and the Blues. He always had it playing in the house, the backyard, and in his truck. Wherever Joe was, so was BB King, Bobby Blue Band, and Muddy Waters. In addition, to food and music, Joe was an avid fan of the San Antonio Spurs basketball team. Joe was a loving husband, family man, hard worker, provider and an honorable man who accepted Christ as his Lord and Savior. He is preceded in death by Gwendolyn Sayles, Patricia Garcia and Michael Hopkins. Forty years ago, Joe was united in holy matrimony to Lorine Hopkins. He was the loving father of Joseph McClain, Michael McClain, Shirley Holt, Quinton Larking and Wesley Allen McClain (Wanda). His extended family includes Waymon Hopkins ( Janie ), Charles Hopkins ( Willette ), Lena Hopkins Smith (Hank), Lori Hopkins White ( Keith), Dudley Sayles, Tracey Garcia, Marian Hopkins. His life and legacy will forever be cherished in the heart of his wife, Lorine and his children. He also leaves behind his numerous grandchildren, great-grandchildren; sister, Harriet McLairen, brother; Walter Porter and a host of nieces, nephews and friends.