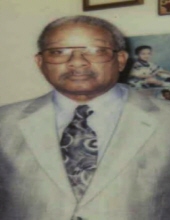 Wesley Lee Franklin, Sr. of Goliad, Texas passed away on Monday, May13, 2019 after reaching the age of 80 years old. After months of failing health, he died peacefully within his home in San Antonio, Texas with his children, Charles Mabry, Wesley Franklin, Jr. and Catina Franklin-Tollett by his side. Wesley was born on July 22, 1938 in Goliad, Texas to Lola Mae Shelton and Sylvester Franklin, Sr. As a very young man, he learned to work hard and to take on whatever job was available to support himself. Wesley retired from Dots Metal Company after 45 long years. In the 1960's, he met the love of his life, Doris Mabry. They lived together almost inseparably for over 40 years, until the untimely death of Doris in 2002. They lived in San Antonio, Texas together and raised 5 children. He was a strong patriarch for his family, a good friend to all, a man who would give his shirt for a friend. He was a good father who always took care of his children and did the best he could to teach and guide them, a loving grandfather and great-grand father to many. Wesley was preceded in death by his wife, the love of his life Doris Franklin; parents, Lola Mae, and Sylvester Franklin; daughters, Doris Franklin and Debra Hamilton; great grand-daughter, Mikayla Cantu; brothers, Chester Franklin and Sylvester Franklin, Jr.; sister, Lula Mae. Wesley leaves behind two sons, Wesley Franklin, Jr. and Charles Mabry. He also leaves behind a daughter, Catina Franklin-Tollett (Donald Tollett); 13 grandchildren; 10 great-grandchildren; sister, Della Mae; sister- in- law, Ruby Franklin and several nieces and nephews.