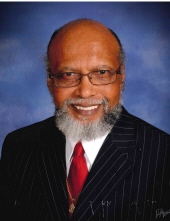 Abram Joseph Emerson, Sr. was born December 14, 1947 in Austin, Texas to the parentage of the late Willie Ray Emerson, Sr. and Mary Ethel Middleton Emerson. He attended Blackshear Elementary School. The family later moved to San Antonio, Texas where he continued his education at Tynan Elementary, Emerson Middle School and finished his public school training at Jefferson High School in 1959. Afterward, he continued his education at San Antonio College finishing in 1961. While at San Antonio College, he organized the Young Democrats. He continued his pursuit of higher education at University of Texas in Austin receiving his Bachelor of Arts degree in Political Science. Abram accepted Christ at the age of eight years old and was baptized by the late Pastor John Joseph Rector. He was active in Sunday School, Youth Choir and Bible School. Abram was an active community worker helping alongside other community activists. Abram began his career at the University of Northern Iowa in Waterloo, Iowa as the Director of the Cultural Center. His exceptional work was noted by cultural and political leaders and he was selected to become a member of the Senior Executive Service in the federal government by President William J. Clinton. He joined the U.S. Department of Housing and Urban Development and served under Henry Cisneros, Secretary of Housing and Urban Development, where he worked for seven years. Upon his return home to San Antonio, he was selected by the United Way of San Antonio and Bexar County to become the Community Engagement Coordinator for San Antonio Fighting Back where he implemented evidenced-based crime, substance abuse, and gang prevention programs. He organized many Eastside neighborhoods to “Fight Back” resulting in a major drop in drug-related crime, the establishment of Oxford Houses for those who are recovering from substance misuse disorders, the implementation of comprehensive afterschool programs that included youth mentoring and the Inner-City Games that involved over 10,000 youth in positive activities during the summer. Abram was also a member of the ROBBED Organization that helped the Eastside Community with many achievements to include the opening of the Langston Hughes Afro-American theatre where he would recite poetry at different shows. Abram leaves to cherish his memory his Mother, Mary E. Emerson, two Daughters, Rana and Jamilah, one Son, Abram, Jr., six Grandchildren, Aminah, Jerry III, Amaya and Anika Golder, Jaedyn Emerson, Sean Emerson, one Brother, Willie Ray Emerson, Jr. and a Dear Friend Claudelle Auxila.