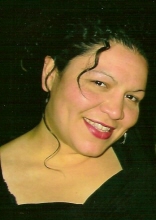 Adriana Ozuna 'Drana' entered into rest on August 9, 2007 at the age of 28. Adriana was born December 21, 1978 in San Antonio, Texas. Drana was a woman of many talents and passions, a fan of poetry, art and literature. Drana cherished spending time with her siblings and extended family. She was known as someone who made friends every where she went. She is survived by her mother Liliana Cordova, brother, Paul Michael Ozuna, sister, Jacqueline Ozuna, nephew, Benjamin and niece Kateline, father Paul F. Ozuna and his wife Debra and their children Erica, Stephanie and Kelsey. Grandparents, Charles and Lidia Partin, Joe and Edna Ozuna and numerous Aunts, Uncles, Cousins and Friends. A Rosary will be held Tuesday, August 14, 2007 at 7:00 PM at St. Benedict's Catholic Church and the Mass will be held Wednesday August 15, 2007 at 10AM from St. Benedict's Catholic Church located at 4535 Lord Rd. Interment to follow at MeadowLawn Memorial Park, 5611 E. Houston St.