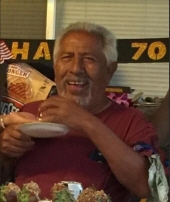 On September 4, 2016, Heaven gained an angel, Agapito A. Hernandez, born to Eulogio and Inocencia Hernandez. He is survived by his daughters, Alicia and Amy; five grandchildren, Adrian, Abel, Ranell, Tiara and Mia; two great grandchildren, Ziar and Jeremiah; his best buddy Max, who stayed by his side to the very end. Agapito is also survived by six brothers, Peto, Sirilo, Milton, Leon, Kay and Phillip and two sisters, Pam and Gina. He was a loving father, grandfather, brother and friend. Agapito was a Vietnam veteran who served in the US Army and received a Purple Heart Medal. He was a kindhearted, giving and loving man that helped any and everyone, no matter what the situation. If he had it, and you needed it, he gave it. He loved to BBQ for his family and friends, fishing with his brothers and nephews, and most of all he loved his family.