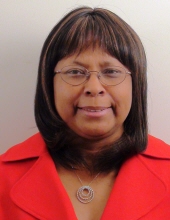 Aileen Annette McClain Williams passed from this life to her eternal home with her Lord Jesus Christ on Wednesday evening June 26, 2019. Born on Tuesday, July 20, 1954 to the union of Charlie Lee McClain and Emma Lucille Beans McClain at Brooks General Army Hospital in San Antonio, Texas, Aileen was the second daughter born to the couple. Although a military kid, with all of its perks, Aileen had the best of both worlds as she was also able to grow up close to a large extended family of grandparents, aunts, uncles, and lots of cousins, and her first pet, Feathers, her loyal Cocker Spaniel. At the age of ten Aileen accepted Christ based on her Baptist upbringing, and later became a member of the Church of Christ. Aileen began her school life early at the Johnston Kindergarten around the early age of four and her elementary school days began in 1960 at Lizzie M. Burges in Seguin, Texas. From there she was one of the first black students to attend Jefferson Elementary, a previous all white schools in the town. Her junior high days were spent at Joe F. Saegret and she went on to attend Seguin High, her beloved Matadors, where she graduated in 1972. After graduation Aileen followed her passion by attending Central Texas College and became a registered nurse in 1976, working at her birthplace Fort Sam Houston Army Post and Fort Hood Army Post both in Texas and the Portsmouth Naval Hospital in Virginia. Aileen was truly passionate about her chosen career as a nurse even unto the day of her passing. Aileen marries her first husband in September 1972 and with that union was born six children, Isom Franklin Jr., Aaron Franklin, Jason Franklin, Joshua Franklin, Joy Franklin and McClain “ Mac ” Franklin. After being a working single mother for many years Aileen had a chance meeting with Eddie Williams, the man she would marry in October 1996; and the man who would be there by her side to the day she was called home to be with the Lord, 22 years later. There were no children born through this union. A few years after marrying, Eddie, his job moved them to Suffolk, Virginia; they traveled the world together. Aileen became a member of the Downtown Church of Christ in 2003 joining her husband where he eventually became an Elder, but Aileen was still a “ Texas Girl “ at heart, down to the Texas Longhorn sticker she proudly displayed on her rear window. Aileen is preceded in death by her mother Emma “Red” Beans McClain, her father Charlie McClain, her grandparents Willlie and Estelle Freeman Beans and Mack and Sarah Thomas McClain. She leaves to cherish her memory, her beloved husband Eddie Williams of Suffolk, Virginia, her six children, ten grandchildren and one great-grandchild, all of the San Antonio, Seguin and Austin, Texas area. Her siblings Arnold McClain (Elvera) of Moreno Valley, CA, Ronald McClain (Leanne ) of Moreno Valley, CA, Charlie Eby McClain (Andrea) of Wiesbaden, Germany, Hannalore Williams Marsh (Walter) Eastern Shores, VA and Chris McClain Scott of Hampton, VA and numerous nieces, nephews, cousins, sister-in-laws and brother-in-laws.