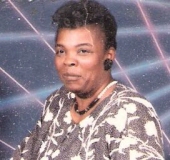 For I am now ready to be offered, and the time of my departure is at hand. I know that I have fought a good fight, I have finished my course, and I have kept the faith. Alma Joyce (Rogers) Daniels (MAMA) was the oldest daughter of six children born to the union of Robert E. Rogers and Verna L. Dabney Rogers on February 17, 1948. On a Sunday late evening Mama heard the voice of the angels saying “Child come on home”. She rose from that body filled with pain to go and be with the Lord. Mama departed from this earth on November 5, 2006. Mama was preceded in death by her parents and two brothers. Mama was baptized and confessed Christ as her Lord Savior at an early age. She was a very active and dedicated member of Mount Ararat Baptist Church, where she held numerous positions. Alma attended and graduated from Wilson Pickens High School in Bellville, Texas. From that she continued her education by attending a nursing school in Denver, Colorado. She furthered her education at St. Phillips Community College where she obtained a degree in child development. Mama used her degree to work for Ella Austin Daycare, Mount Zion Daycare and San Antonio State School. Frank Edward Daniels and Alma Joyce Daniels were married on January 12, 1966 in holy matrimony; their union produced four lovely daughters, Janet, Jacquelyn, Joslyn and Francheska. Mama and Daddy are the proud Grandparents of 8 grandkids. All of them were the joy of their lives. Mama leaves to cherish her fondest memories, her loving and devoted husband Frank Daniels; her very attentive and caring daughters Janet Daniels Clark, Jacquelyn Daniels Noble, Josyln Daniels Wright and Francheska Daniels; siblings, uncles, aunts, a host of nieces, nephews, cousins and friends.