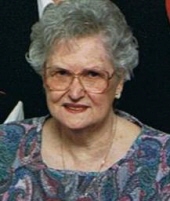 Mrs. Alta R. Aliano, born on October 29, 1918 went to rest with the Lord on April 5th, 2008 at the age of 89. Prior to moving to Texas to join her son and his family, she was actively involved with the Women's Auxiliary Post #1981 and the Women's Improvement Club in Madeira, California for many years along with her husband, Ernest Aliano who was president of the same Veterans of Foreign Wars (VFW) post for a number of years along with 20 plus years of involvement in the VFW. She is preceded in death by her parents Samuel Davis and Vada Lee Stacy, brothers Alfred, Allen, and Albert Davis and her sister Almeda Davis. She was also preceded in death by her husband of 51 years, Ernest Aliano. Alta is survived by her sister, Ava Lee Everly of Forsythe, Missouri, son Donald Aliano and his wife, Arlene Aliano and grandchildren Maria, Danielle, Ernesto, Angela, Joseph and Martha Aliano and seven great grand children. A private memorial service was held on Tuesday, April 15, 2008 at Meadowlawn & American Mortuary. Any tributes or memorials are requested to be sent to your local VFW Club in support of all of our veterans.