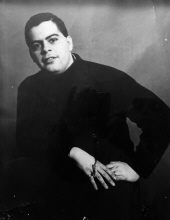 It is with a broken heart that the family of Alvin (Albert) Vasquez announce that the Lord has called for his son on April 15, 2020, at the age 74, in Universal City, Texas. Alvin was born on September 2, 1945 to Brijida and Bernardino Vasquez in Manhattan, New York. On June 18, 1966 he and his wife Maria were married at St. Cecilia Catholic Church. Alvin enjoyed family time during the holidays and special events the most. He was a businessman and experienced HVAC tradesman Alvin is survived by his loving and devoted wife Maria; daughters, Audrey and Jennifer; son, Alvin Vasquez II; grandchildren, Justin, Stephanie, Melissa, Jonathan and Melanie; brothers, Louie, Joe, Willie and Ray; sisters, Delia and Almida, many relatives, friends and his canine buddy, Madison. My dad was the greatest on this earth. He was a man of little words, but his actions always spoke louder. There is no question that I am just like he was. Like my dad, I don’t say much, but I will do anything for those I love. My dad was very compassionate and no matter who you are, he never said no to anyone in need and always had an answer. He was a devoted husband and father, but cherished all of his five grandchildren. What a great Papa he was. After he retired, he was extremely dedicated to his granddaughter’s as he would pick them up from school, attended all their school and sporting events. My dad was so attentive and catered to my mom with anything she wanted because as the love of his life, he would move mountains for her. He was the best dad, Papa, uncle, brother in-law and without question, the best husband anyone was lucky enough to ask for. It was so touching to us to talk with people who called to issue their condolences, listen to their memories of him and hear them say, “he was the best”. My dad made me laugh and he’s made me cry, but what I am most grateful for is that he made me who I am. I thank God that I was here for him and will always keep the loving memories forever in my heart. I pray that he is now at peace in heaven and is with my grandmother’s and with those we have lost. He was very loving and caring with every conversation always ending with me with “I Love You” and made sure to give a kiss and a hug which I will forever miss. I was fortunate to have him for 50 years and if I could, wish for more. To the greatest dad any daughter could wish for, know that one day we will see each other again to hug and once again say, “I Love You”, and although you have physically departed, I want you to know that I love you to the moon and back. Butterfly Kisses Dad! Until we meet again!