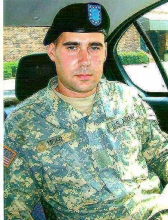 Andrew Lorenz Meier, 30, passed away March 15th, 2008 in San Antonio, Texas. Andrew was a quiet person of great strength who helped so many. Sadly, he will never realize the power of his personality and the positive effect he had on all who were blessed to know him. Andrew was a combat medic with the US Army 228th Combat Support Hospital who was hand selected to attend an upcoming medical mission in Central America. Andrew also helped with the Honduran Water Ministry digging water wells for the less fortunate. Andrew is survived by one daughter, Aubrey and her mother, Misti Kennair, mother, Kathy Meier and father, Art Meier, brother, Jonathan and his wife Tracy Meier, niece, Briquelle Clegg-Meier and many other extended family members. A Memorial Service is scheduled for 3 PM, Thursday, March 20th at St. George Episcopal Church, 6904 West Ave. San Antonio, TX. 78213. In lieu of flowers, memorials may be sent in Andrew's memory to the Animal Defense League, 11300 Nacogdoches Rd., San Antonio, TX. 78217 or to a charity of your choice. To leave a note for the family, go to meadowlawn.net and select Obituaries. Arrangements by Meadowlawn Crematory and American Mortuary.