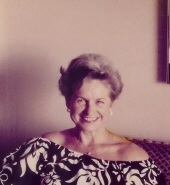 Our beloved wife, mother, grandmother and great-grandmother, Annette Emerson Loyd passed away after a brief illness on Sunday, March 12th, 2006 in San Antonio, Texas at the age of 80. Annette was born to Annie and James Frederick Emerson in Macon, Georgia. She met John, her future husband of nearly 60 years on a blind date while he was attending Georgia Tech and she was at Wesleyan College. They were married in Atlanta, Georgia in June of 1946 and moved to San Antonio. They soon added two wonderful sons to their family, Johnny and Jimmy. Beloved by family and friends, she is remembered as a true Southern lady who always had a kind word, was a true friend, shared her faith and loved unconditionally. A close friend’s child once affectionately dubbed her, “Miss Nette.” As one busy involved lady, anything “Miss Nette” ever did involved working personally with people. If you didn’t know her, you missed something wonderful and if you did know her, you were blessed. Annette made friends easily and became active in the San Antonio Junior League serving as Rummage Sale Chairman, Waitress Chairman and as a delegate to a League Conference in French Lick, Indiana. She initiated and organized the Senior Citizens Lunch Bunch that met every Thursday at the Alamo Heights Methodist Church. She and her friends were concerned about the importance of nutrition for the elderly and their social lives. Every Thursday over 200 people enjoyed delicious hot meals and friendly faces. Before Annette became involved with the Lunch Bunch she was a Bluebird, a Cub Scout Leader, a Sunday School Teacher and served on her church’s Board. She was in charge of the needlepoint kneelers in the old church on Broadway and the kneelers at the new church where she served on the decorating committee. Annette took time out from her community involvements to play tennis, needlepoint and smock for her four granddaughters. She loved traveling to Europe and her favorite spot was St. Simons Island off the coast of Georgia where she went every year as a child. Annette is survived by her devoted husband, John Loyd, sons, Johnny and wife Virginia, Jimmy and wife Susan, sister Harriet Thomas, brother-in-law Paul and wife Annabelle Loyd, brother-in-law Rice Jacobs, grandchildren Patrick, Kaly and Liza Harkins and Chaney Hagemann and husband Dan, Elizabeth and Jay Loyd, Amanda Bezner and husband Rob and Andrew Himoff, great-granddaughters Parker and Chloe Hagemann and great-grandson Ethan Bezner. Annette, you were very loved and you will be very much missed. Thank you for leaving a part of your spirit in all who knew you and shared your life. In lieu of flowers, the family requests memorials be sent to the Alamo Heights United Methodist Church, 825 E. Basse Rd. San Antonio, Texas 78209, the First United Methodist Church in Kerrville or the charity of your choice.