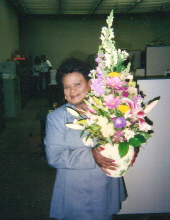 Mrs. Annie E. Hysaw Harris Rosser aka "Jeanie" was born on July 5, 1941. She was the second of six children born to Booker T. and Estell Drummer Hysaw.Her brothers, Otis, Chester and Marvin proceeded her in death. Booker T. Hysaw, Jr. and William E. Hysaw are her only surviving brothers. Her early education was split between St. Peter Claver Catholic School and Booker T. Washington Elementary then on to Douglass Junior High. She attended Phillis Wheatley High School and graduated from St. Peter Claver Catholic School in 1959. While attending high school she went to Hicks Beauty and Barber College and received her license in cosmetology. Upon completing Hicks Beauty and Barber College, she went on to work at Frost Brothers Beauty Salon in North Star Mall. She was one of the first African American professional hair colorist and stylist. Annie became an expert on hair color and mixing and dying hair. She later became an entrepreneur in her own right by setting up and running her own beauty salon for a number of years. Later she became a stay at home mom until her only child reached middle school age, then she returned to the workforce. Annie went on to be employed by Broadway National bank for twenty nine years in the mortgage Loan and Lending Department. Jeanie met and married the late Charles R. Harris. To this union her only child was born, Karen Denise Harris. Later she married Herman M. Rosser who proceeded her in death. As a young girl she joined Antioch Baptist Church under the guidance and leadership of Rev. J. J. Rector, Sr. Her parents, three brothers proceeded her in death. She leaves to mourn her only child, Karen D. Harris of San Antonio; brothers, Booker T. Hysaw, Jr. and William E. Hysaw both of San Antonio and a host of nieces, nephews, cousins and friends.