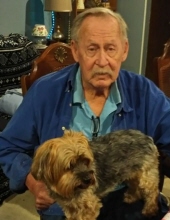 LTC Armie Karl Gruenewald, 80, of Hot Springs Village, Arkansas, passed away October 7, 2020. Preceding him in death is his wife Christine Gruenewald, whom passed away from lung cancer August 24, 2020. He was born January 17, 1940, in Corsica, South Dakota to Karl and Evelyn (Ommen) Gruenewald. LTC Armie K. Gruenewald had a long military career as a Nurse Anesthetist. He was a distinguished Vietnam war veteran. While serving in the US Army, He received numerous decoration’s including, Meritorious service medal, Vietnam Service medal, and Republic of Vietnam Gallantry Cross Unit Citation Badge. In 1986, after serving for 21 years, and completing his last assignment in Heidelberg, Germany, he was honorably discharged. For the next 8 years, he accepted travel assignments as a CRNA. In 2003, he and his wife retired to Hot Springs Village, Arkansas. Beloved father of Valerie (Sandy) Huff, Robert (Clara) Gruenewald , Lionel Scott (Dawn) Gruenewald, and Kimberly Dawn (John) Bomer. Step children; Stephen (Sonia) Montgomery, Sherry (Tony) Pope, Kimberly Jane (Tom) Smith, Teresa (Nicholas) Brown, and Scott Bentz. Numerous grandchildren and great grandchildren. Due to COVID-19 the family will not have a memorial service. In lieu of flowers please donate to the charity of your choosing.