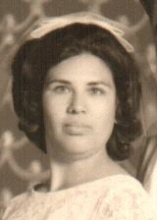 Belen R. Martinez was born to Pablo Robles and Delfina Ramos on December 27, 1929 in Converse, Texas. She was the oldest of seven children. On January 23, 2008 she departed this life to join God and his Angels in her heavenly mansion. Belen married Pedro Martinez on October 12, 1946 and they were blessed with nine children. She is a beloved Mother, Grandmother, Great-Grandmother, and Great-Great-Grandmother and will be greatly missed by all. She enjoyed quilting, playing bingo and cooking for her family. Her favorite foods were Lucky Charms and pink polvorones (cookies). She made quilts with so much love for her children, grandchildren and great-grandchildren. She was a woman with a good heart, always kind, helpful and accepting of others. With loving care and kindness she helped raise many of her grandchildren. Belen is preceded in death by her parents, husband, son, Ricardo Martinez, daughters, Adelina Martinez, Diana Romaniz and Irma Martinez. Belen leaves to cherish her loving memory, her children, Yolanda Ahuyon, Olga Montoya (Richard), Gloria Hernandez (Martin), Pedro Martinez (Maria) and Norma Martinez of SanAntonio, Texas; two brothers, Amador and Armando Robles; four sisters, Braulia Robles-Flores, Alicia Martinez (Nick), Elida Regalado and Elisa Robles; 24 grandchildren, 45 great-grandchildren; 2 great-great-grandchildren and a host of nieces, nephews and friends.