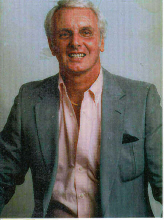 Benjamin "Tom" Halligan left this world to be with his Heavenly Father on Friday, June 13, 2008 in San Antonio. He was born on January 19, 1937 in Brooklyn, N.Y. to the late Benjamin Thomas and Helen Dravetsky Halligan. He was preceded in death by his grandparents, who raised him in Richeyville, PA. Tom excelled in sports, especially baseball, basketball and golf. He attended A&M at Tulsa, OK and gladly served his country in the U.S. Army. Tom was employed by Minnesota Mining, known as the 3M Co., which ultimately brought Tom to San Antonio to stay. He was a very well known salesman among his colleagues and friends. He was known as "Tom the bomb" by all of his golfing buddies. Tom had a drive to pursue his dreams and to never give up. He is survived by his aunt, Irene Beck of Tucson, AZ; beloved friend, Joan Williams; former wife, Diane Rissman, and by other family members and numerous friends. Many thanks to Vista Care Hospice for all of their care and devoted service. A memorial service is scheduled for 7:00 PM on Friday, June 20, 2008 at Mt. Sinai Baptist Church, 2157 Burnet St., San Antonio, 78239, with Reverend L.H. Mills, pastor and Reverend Daniel Mills as officiating pastor.