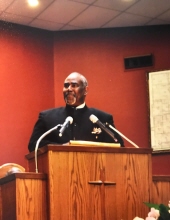 Reflection of Life Bishop Odell Lee Jr. was the oldest of four siblings, Linda Faye Mosley, Robert Charles Lee Gerard, and Cheryl Rena Duvall. Born to Mr. Odell Lee Sr. and Mrs. Erlene Whitley Lee on May 5, 1952. He attended Wheatley High School and Ambassador School of Theology. On March 13, 1976 Bishop Lee was united in Holy Matrimony with Teresa A. Moszee and gained a beloved daughter Ronda Y. Moszee. He became a Minister in 1976, and became a member of The Prince of Peace Baptist Church. He later went on and became a member of The General Assembly Church of The Living God and P.G.T. He served as Pastor for The Church of The Living God in Tyler, TX, for 3 years. At age 42, he became chief overseer of the Assembly. His success lies in the Simple Gospel message and his desire to “Win Souls for Christ.” He was honored by Texas peers by being named an “Outstanding Minister of the Nondenominational Pentecostal Church body in Prairie View. In May 2015, he became ordain as a Bishop of the New Way of Life Ministries, Intl. Bishop Lee served in the ministry for 21 years he oversaw the work of 62 churches in four districts in Texas and portions of California. He served as primary minister, also as a keynote speaker for churches across the state and nation. He became involved in numerous community activities including The Black Ministers Alliance, Pastor’s Network and the Rusk-Cherokee Community Action Program. He attributed the success of his pastoral ministry to his commitment to outreach and evangelism through community service. Bishop Lee made his transition with his loving wife and family in San Antonio, TX on February 11, 2020. He leaves behind to cherish his memories widow wife of 43 years together a total of 48 years Teresa A. Lee, daughter Ronda Y. Burr, son-in-law Robert D. Burr, two grandchildren Dominique Yvette Clark and Jarrod Durant Wilborn Jr., and two great grandchildren Xiauna Rae Patterson and Dominick Elijah Clark. Sister-in-laws, Sandra Cassel, Lillian Nolan, Denise Grant, Marie Moszee, brother-in-law Glen Cassel, and a host of nieces, nephews, cousins and friends.