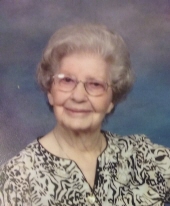 Blanche Johnson, 95 of Santa Fe, Texas departed from this life on Friday, June 24th, 2016 at home. Prior to 2008, she was a resident of San Antonio for over 60 years. Mrs. Johnson was born March 8th, 1921 in Allentown, PA. She was a homemaker, librarian, and worked over 20 years at the San Antonio Independent School District Administration Department hiring and placing teachers throughout the school district at all levels. The highlight of her day was to play bunco and she played with the same bunco club for over 25 years. Survivors include: one son, Ted Johnson of San Antonio and one daughter, Jill Davis and husband James of Santa Fe; five (5) grandchildren; Jason Mann and Salena of Santa Fe, Tiffany Johnson, and Ted Johnson, Jr. of San Antonio, Juanita Gray and Sean, and Jamie Lopez and Alberto of Alvin, Tx.; and thirteen (13)great-grandchildren.