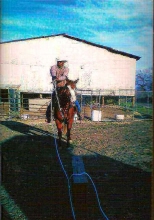 On October 7, 1965, Bobby Joe Coleman was born in San Antonio, Texas to Connie Lee Coleman and Betty Hamilton. He attended the public schools of Victoria, Texas. Bobby met and married Melissa Beard and they shared twenty one wonderful years together. He worked for Victoria Independent School District for ten years. Later he moved to San Antonio, Texas and became employed with the Yantis Company where he worked as a driver for several years. He later became employed with All American Excavation until his passing. Bobby loved horses, he would call them his babies. He was a calf roper, and when not dealing with his horses you would find him fishing. His favorite words were "get one done" and "get to knocking". He slipped away quietly on Friday, August 16, 2013. Bobby will be greatly missed. He was proceeded in death by his father, Connie Lee Coleman and his sister's Betty Hardrick and Claudia Jones. He leaves to cherish his memory a loving wife, Melissa Beard Coleman; mother, Betty Hamilton; son, Bobby Joe Coleman, Jr.; four daughters, Claudia Coleman, Helena Coleman, Stephanie Coleman and Candace Mahan; eight brothers, Kenneth Coleman (Rochelle), George Coleman, Bill Coleman, Jimmy Jones, James Jones, Charles Larking and Johnny Jones; three sisters, Carolyn Reichwein, Gladys Odem and Dorothy Haynes, many nieces, nephews, cousins and a host of relatives and friends.