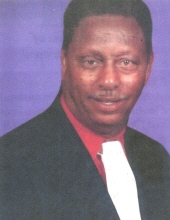 Booker T. Greenwood was the only child born to Ida Mae Greenwood, November 11, 1929 in Austin Texas. He attended school in Austin and San Antonio, Texas. He received Christ at an early age and was a faithful member of the Hebron Baptist Church. His life employments included working at Summer’s Drug store, working as a gas attendant, body work and preparation of vehicles for painting. He then later became a Taxi-cab driver, delivered papers for Express News and various other jobs until he retired. To his first union to Lozie Thompson came: Lozie Bios, two granddaughters Tamara Cole and Latrice Lee and two great grandchildren Lincoln and Braxton Cole who reside in the Dallas area. Next came Anna Blanton with three grandsons and a granddaughter. Andre Bios and wife Isela with two great grandchildren Anyssa and Ayden. Robert and Reginald Blanton, Rebecca Buhrig and husband Herman; two great grandchildren Zerleanah and Azalea Buhrig live in the Austin area. Two step sons, Retired Captain Derwin Bios and wife Nicole who resides in the Austin area and a grandson Derwin E. Jr. AKA Mellow with wife Sherrie who reside in Floresville and four great grandchildren Kaida, Kayden, Kamya and Kaylee. Retired CPO Reginald Bios Jr. and wife Lydia, four grandchildren Lemae, Reginald Habee, James, and Greg Bios who all reside in Maryland. From his second union to Jonell came: Booker T. Jr., Diana, and Charlotte Greenwood. Two grandchildren who reside in the Nevada area and the California area. Preceding him in death his mother Ida Mae greenwood a member of the Mt. Olive Grand Chapter of Texas order of the Eastern Stars, Jonell Greenwood, Booker T Greenwood, Lozie Thompson, Robert and Reginald Blanton. Remarks from Stepsons: He was a positive role model and father figure during out pre-teen years leading up to manhood. Hard work was never an issue for him, this is what lead us to a successful Military career. We will all miss him. Remarks from Latrice: If I did not know anything else I know that my grandfather loved to fish, sit around and whoop anyone who would dare to sit down and play dominos with him. He was a great cook and loved to bake while listening to his favorite blues records. He was never shy to say whatever came to his mind, and even if he made fun of you, the smile he gave you at the end would cure the sting.