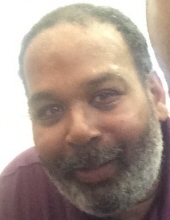 Bruce Duane Gibson went home to be with the Lord on Friday, March 6, 2020 at 8:00 AM at the precious age of 56 with his loved ones by his side. He was born May 29, 1963 in Hanau, Hess ,Germany to the parents of Everett Ray Gibson, Sr. who was married to Ella B Waldon-Gibson. Bruce was blessed with 3 brothers and 3 sisters which made him the 6th child born out of the 7 siblings. Bruce grew up in San Antonio, Texas and was a graduate from Theodore Roosevelt High School. After his journey through jobs Bruce went to a trade school and graduated with a certificate of completion as a Medical Assistant. He was very proud to achieve that goal in his life. Bruce's nickname was "Big Bruce" because he stood 6'5" inches tall. Although he was 6'5": tall, his heart was as big as his height. Bruce was funny, talkative and was loved by everyone that he came across in his life. His past-time things to do were watching the San Antonio Spurs and the Dallas Cowboys football team. He had a love for music and dancing. He once competed in a dance contest with his sister Veronica, and won first place with a prize of $1,000. Bruce had a fast hand when dialing the radio stations and would win lots of prizes like tickets to concerts and money. Later on in Bruce's life, he encountered a rough road. He went on to battle mental illness,but nevertheless, his family was always by his side through thick and thin. Bruce had a best friend by the name of Jarrod Findley that he met in the 80's who shared the same love for music, dancing and enjoying family time. Bruce's love, laughter and jokes will truly be missed by his family and friends. He was preceded in death by his parents Everett Ray Gibson and Ella B. Waldon-Gibson; sister, Renee Gibson-Zertuche and brother, Everett Ray Gibson, Jr. He leaves to mourn his siblings, Rochelle Bernice Gibson, Gregory Renard Gibson, Veronica Jean Gibson and Keith Leon Gibson; nieces, nephews, cousins and a host of friends.