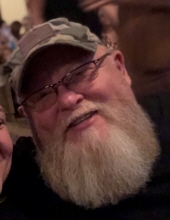 Buster Fisher joined his Lord and Savior, Jesus Christ, on Sunday, December 1, 2019, at the age of 61. He was born April 1, 1958 in Kerrville, Texas. Buster was a graduate of McCollum High School in 1976. He graduated from UTSA, where he earned a Bachelor’s in History and a Master’s in Educational Administration. Buster married the love of his life, Soine Slaybaugh on December 31, 1997. They have six beloved children. Buster was a lifelong educator, teaching in the Dallas, Judson, and Harlandale School Districts. His favorite post was principal of Homer Schultz Elementary School in Harlandale, the position he retired from in 2011. Buster is survived by his wife Soine, father Elvis Fisher and stepmother Joanna, mother Sandra Lane, stepfather Lawrence, and children Sandra Jean, Elvis, Zachary, Marina, Diana, and Zilah, sister Lori Richter, and numerous aunts, uncles, cousins, and friends. Buster was kind and loving. He had a great sense of humor and his laugh was contagious. By nature, he was a protector and comforter. He was devoted to educating children and an advocate for foster-care and adoption.