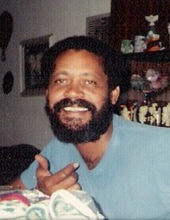 Carl D. Derry was born to David Lee Derry and Bennie Hollingsworth Derry on February 4, 1953. He was the sixth child of twelve born to this union. His parents and three siblings preceded him in death. Carl was educated in the San Antonio Independent School District. After graduation he enlisted in the military briefly serving in the United States Army and returning to San Antonio. Carl was a hard and consistent worker and was employed in various vocations with his last being in convention decorating prior to his disability from a stroke in 2008. Carl liked to spend his leisure time listening to music, reading, watching movies and sports and just relaxing in conversation with family and friends. He always enjoyed and looked forward to sitting on the porch at home where he was joined by other family members, neighbors, friends and often strangers just passing by. Growing up with his many siblings the family often gathered with one another and extended family and friends to share in special celebrations or just have a fun time together. In addition to being a great brother and son, Carl was an awesome uncle and adored his nephews and nieces. Carl cared for, supported and loved his family and was loved by them. His love for family also extended to many close, long-term relationships with loyal and devoted friends and their families across the city, state and country. Carl recently diagnosed with cancer was determined to do what was necessary to get treatment. Unforeseen outcomes resulted in his declining health as his family and close friends supported him in his months long battle. Over the years, Carl by God’s grace and mercy, was surrounded by family that shared the compassion of Jesus and God’s gift for eternal life and placed his faith in Jesus as his Savior and has peace with God.
“And God shall wipe away all tears from their eyes; and there shall be no more death, neither sorrow, nor crying, neither shall there be any more pain: for the former things are passed away.” Rev. 21:4