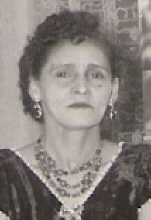 Carmen I. Martinez was born on April 20, 1909 in Guayama, Puerto Rico. She moved to New York City in 1953 and that was her home until she relocated to San Antonio in 1987. During her life she was a mother to many and was loved and admired by all who knew her. Carmen went home to be with the Lord on August 16, 2005 at 2:20 P.M. She leaves the following loved one to cherish her memory, her daughter, Maria Esther; two sisters, Anatilde and Andrea Vega; her grandchildren, Daisy, Edwin, Reynaldo, Aida, Maria and Jose; her great granddaughters, Raemelle and Ezra; her great-great grandchildren, Jakob and Kyler; and all her remaining family and friends in New York. Her beloved son, Jose and her special granddaughter, Jozette have preceded her in death.