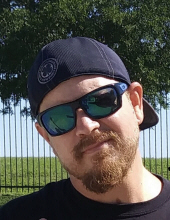 Chris Collins, 41, passed away suddenly, yet peacefully, on May 24, 2019. Chris was born on May 30, 1977 in Corpus Christi, Texas but had enjoyed living in San Antonio, Texas since ten years of age. Chris was best known for his willingness to help anyone at anytime-stranger or friend. He had a beautiful heart and compassion for all. Although some would argue he was really best known for his witty manner and hilarious one-liners that kept everyone smiling. His brilliant mind, artistic talents and love of good music only accentuated his beautiful personality. Chris is survived by his mother, Anna (Sam) Saenz of San Antonio and his sister, Alison Collins DeMull (Shawn J DeMull), of Dallas, Texas. In addition to his sister and mother, Chris is survived by his niece, Amanda DeMull Garcia, his nephew, Michael DeMull. Paternally, he is survived by his aunt Sandra Wilson (Allen Collins) and cousin Kelli Collins (Jeff Griffin) of Noble, OK. Maternally, he is survived by several aunts, uncles and cousins; all of which he loved dearly. He is preceded in death by grandparents, Elvira and Guadalupe Saenz of Corpus Christi, TX and Ora Ann and Everett Lee Collins of Wynnewood, OK and his uncle, Allen Collins of Wynnewood OK. He was also preceded in death by his father, Stephen Ray Collins of Corpus Christi, TX. Condolences can be left at www.Legacy.com and contributions may be made to Alamo Head Injury Association of San Antonio, Texas. Arrangements made through MeadowLawn Funeral Home and services will be held in Portland Texas on Saturday, June 1, at 10:00AM at Our Lady of Mount Carmel Catholic Church with visitation to follow.