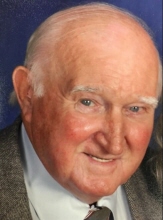 Clement Louis Kotara passed away Friday, June 23, 2017 at the age of 82 in the comfort of his home. He was born on August 24, 1934 in Falls City, Texas to Leon and Helen Biela Kotara. He was a long time resident of San Antonio. Mr. Kotara retired from VIA Metropolitan after 36 years of service. He enjoyed farming, hunting, fishing, and attending to his livestock at his farm in Kosciusko. He is survived by his loving wife of 54 years, Irene Kotara; daughters, Janice (Rich) Berthelsen, and Peggy Kotara-Spore (Guy) Spore; a son, Kenneth W. Kotara; sisters, Tillie Titzman, Annie (Bert) Pruske, and Virginia (Charlie) Tudyk; 4 grandchildren: Sean (Taylor) Spiker, Trevor Spiker, Joe Kotara, Donald Berthelsen, and numerous other relatives and friends. Memorial Mass will be at 10:00 AM on Friday, June 30 2017 followed by refreshments at St. Jerome Catholic Church. For those desiring, donations in Clement's memory may be made to the American Diabetes Association or a charity of your choice.