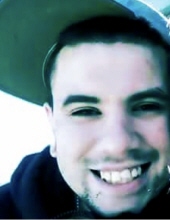 Corey Isaiah Trevino went to be with the Lord on Monday, May 13th at the young age of 31 years. He was born August 5th, 1987 in San Antonio, Texas to Diane Lynn Carter and Robert Larry Trevino. Corey embraced the fun in life with his joking and laughter and the countless different restaurants he enjoyed. His hobbies were biking, being outdoors, any type of car – sports or classic muscle and skateboarding. Corey will be dearly missed by his family, especially when he looked you in the eyes, asking for a snickers bar, beets, or breath mints when he was younger, along with the countless hours we spent in a skateboard shop. How we wish we could have just one more time. His favorite saying between him and his mom was “I love you to the moon and back”. Corey is survived by his son, Isaiah, mother, Diane Lynn Carter (Guzzy), his father, Robert (Bobby) Trevino, brothers, David Krueger (Cynthia) and Robert A Trevino, Jr. Additional family members include aunts, Lynn Ellis, Cathy Tilliotson, and Alice Guzzy. Uncles Terry Guzzy, and Tim Guzzy (Lorrie). Cousins Chris, Dacey, Corky, Amanda, Sydney, Alicia, Timothy, and Jennifer, along with a host of other relatives and friends. Corey is reunited in Heaven with his paternal grandparents, Manuel and Armandina Trevino, maternal grandfather, James W. Guzzy, his uncles, Manuel Trevino Jr., Bruce Robert Guzzy, Herple A Ellis, and his loving fur babies, Sitka and Millie. In lieu of flowers donations may be made to Haven for Hope.