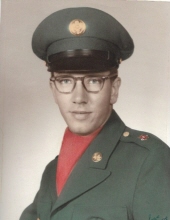 Daniel Peter Fichtner, age 76, of San Antonio, Texas went home to be with the Lord on Wednesday, July 24, 2019 during the evening hours with his daughter and grandchildren by his side. Danny was born December 2, 1942 in Milwaukee, Wisconsin to Max and Agatha (Schwan). Danny shared the honor of being the youngest sibling of 14 with his twin brother David. He enlisted in the Army April 3, 1964 and served as a Specialist until March 25, 1966. While serving in Germany, he met the love of his life, Angela Nowak. Danny spent 29 years working at the Kopfman Company where he made Formica countertops along with a few of his brothers. He enjoyed his Friday fish fry and the Green Bay Packers. In 1996, he moved with his daughter to San Antonio, Texas and spent the remainder of his life living there. His days entailed in caring for his wonderful cats Kiki, Pinta, Stripe, Tigger and Angel. He had a lifelong love of history and was a passionate and proud American. Mr. Fichtner is preceded in death by his parents and twelve brothers and sisters. He is survived by his loving daughter, Alicia Thompson, and son-in-law, Joseph; Grandson, Shamar Bradley; granddaughters, Anikka and Angelina Thompson; great granddaughter, Dru Bradley; and caring sister, Toni Shefchik and numerous nieces and nephews and other family members. He will be greatly missed by his family and friends. A military service will be held on Thursday, August 8, 2019 at 2:30 pm, at the Fort Sam Houston National Cemetery.