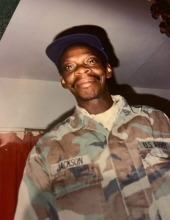 Danny R. Jackson was born to Jerry Jackson and Katherine Johnson Jackson On January 28, 1953 in Thomaston, Texas. Danny was a devout Christina and father to three children; Monica, Marie and Daniel. Danny went to school at Daule and Cuero High Scholl in Cuero, Texas. Right out of high school he entered the Army. Upon completion of his tour he made San Antonio, Texas his home and resided here until his death. His siblings were member of Bethany First Baptist Church and he eventually found his way there as well, where he joined his family serving God under Rev. Dr. Ronald Benson. Danny was preceded in death by his son, Danny, Jr. his parents and two brothers, Jerry, Jr. and Everitte and a sister, Janet. He is survived by sisters, Odessa Hicks (James), Brenda Mays, Kathy Brooks (Johnny) and Beverly Williams; brother, Wayne Jackson (Vicki) and a host of nieces, nephews and other relatives and friends. Danny was a caring man up until his death.