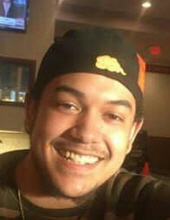 Mr. Darrin C. Durst was born on September 14, 1998 to the union of Dustin C. & Rhonda Durst. Darrin attended school in the North Side Independent school District. Darrin was employed as a cook at Luby's and then on to be a cook at Mama Margie's Restaurant, and his final job was at Krab Kingz where he became the manager. Darrin was an outgoing, loving, caring, kind, and dependable son, brother, uncle, cousin and friend. He always had a smile on his face and loved helping others. His favorite college football team was Texas A&M and he loved his San Antonio Spurs. Darrin loved listening to oldies music as well as spending time with his family and friends. He also loved to skateboard with his brother, and he loved his dogs. Darrin leaves behind cherished memories, his mother whom he loved dearly, Rhonda J. Loving; his father Dustin C. Durst; two grandmothers Phyllis Durst and Kathryn Nicholas; three brothers Devin C. Durst, Donovin C. Durst, and Damin C Durst; Five uncles, two aunts, nephew Royce W, Durst and a host of cousins.