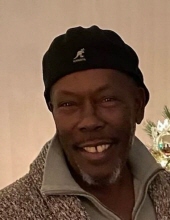 Our devoted brother, uncle, and friend, entered into eternal rest on December 16, 2021 at the age of 60. He was born in San Antonio, TX, the 2nd child of 3 to parents Eli and Sarah Reed. Eli Reed preceded him in death on Nov. 6-1998, and Sarah Reed Preceded him in death on Oct 7, 2019 and his Aunt Lillie Brown on May 28, 2017. Darryl was never married nor fathered children of his own, but leaves behind his brother Quinton E. Reed (Wife Anitra) and Sister Marsha A- Reed. Darryl graduated from W.H. Adamson High School in 1980. Which is where he developed lifelong friendships and his love for music. He began working various jobs as he navigated through his life. He was a courier for Methodist Hospital in Dallas, Texas. He moved from Dallas, TX to San Antonio, TX. Where he established employment with USA Trucking and also worked as an Uber Driver. He was later employed as a courier for FedEx. Shortly after working with FEDEX; During the time of logistics short falls caused by The Covid Pandemic, Darryl began his short career as a truck driver for Schneider National Logistics until his recent passing. Darryl was also a man of faith. He took the right hand of fellowship with Grace 1st Baptist Church under the pastorship of Reverend Allen M. Ford, February 24, 2019. He was a devout Christian who always strived to encourage others to follow his devotion in Christ Darryl had such a loving spirit and was truly musically inclined. Music was his life. He became an accomplished tenor saxophone player, along with sharing music from his Keyboard. One of his favorite music artists was "Kenny G." In his spare time, he enjoyed cooking and traveling. His most recent trips were Sharing Thanksgiving with his family in San Antonio, and his trip to Oklahoma December 3, 2021, where he went camping with Steve and Diane, two of his devoted friends. Darry always mentioned his constant communication with cousins during his travels kept him motivated. Darryl loved the time he spent with his nieces: Renalda (husband Torian), Jasmine, Georgia, Francesca, Elizabeth, and his nephews: Quinson (wife Danielle), Brandon, Xavier, Avery (Fiancée Kim), Christian and Isaac. There are many memories that Darryl created with all whom he loved and his memories will be cherished forever.