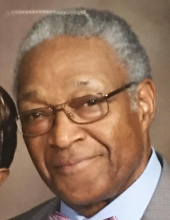 Earl Matthew Taylor Sr. went to be with our Lord on November 1, 2019. He was born December 12, 1948, to Albert and Nazarene Taylor in Talladega, Alabama. Earl retired from the United States Air Force after serving our country for 24 years. He was a great man with a big heart. Earl never met a stranger because to know him was to love him. He loved cooking and baking, famously known for his peach cobbler and cookies. But his greatest love of all was his family. Earl received his first heart transplant in 1997 and later, in 2014, received his 2nd heart and kidney transplant. Through all of this, he remained strong and never lost faith. He dedicated his time serving the Lord as a member and a deacon at Antioch Missionary Baptist Church. He will be dearly missed by all. Earl is preceded in death by his parents, Albert Taylor Sr. and Nazarene Taylor; brothers, Kendolyn Howard Sr. and Albert Taylor Jr. Left to cherish his memory are his wife of 48 years, Evelyn La Grace Taylor; children, Earl Taylor Jr. and wife, Lisa; Eric Taylor and wife, Kelly Ann; grandchildren, Kaleb, Kendrick, Kylie, and Garrett; great-grandson, Kyree; siblings, Lillian Carter, Joseph Taylor and David Taylor; and a host of nieces, nephews, and bonus children. The family would like to give a special thanks to Dr. Daniel Kellum Jr., Dr. Paraic J. Mulgrew; and the team of doctors and staff at Methodist Heart Hospital. In lieu of flowers, the family is asking for you to donate in remembrance of Deacon Earl Taylor Sr. to Donate Life – Texas. You may send donations in remembrance of Earl to 2510 Westridge St., Houston, Texas 77054 - Attn: Finance Department or visit www.donatelifetexas.org.