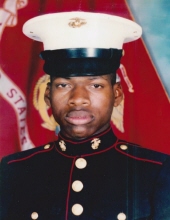 Derrick Woods Sr, 45, was called home to the Lord on August 4, 2019 peacefully in his home. He was born on January 22, 1974 to Gwendolyn Louise Woods and D. McDonald. He was the fourth of five children. Derrick Woods, Sr. graduated from Edgewood High School in 1992. Soon after, he joined the United States Marine Corps where his adventures took him to places like California and Japan, to name a few. Upon leaving the Marine Corps, he returned home to San Antonio where he began working in the Bexar County Tax Assessor’s office. Derrick would soon find his calling as a Bexar County Sheriff’s Deputy for the Bexar County Detention Center where he remained until his retirement in 2014. Derrick met and married Angela Yvonne Duncan in 1995. From this beautiful union, two children were born; Danielle Fatima Woods and Derrick Woods Jr. Derrick was a very family orientated man and cherished all the time he spent with his family. Occasionally accused of being the “Nerd” in the family, Derrick spent a lot of time working on computers and was often called upon for assistance. He enjoyed going to concerts and comedy clubs. He was always a fun spirit to be around and was always ready to “cut a rug!” He is preceeded in death by his loving wife, Angela Yvonne Woods, his mother, Gwendolyn Louise Woods, his older brother, Reginald Woods, and father in-law Reid Duncan, Sr. Derrick leaves to mourn his passing his daughter, Danielle Fatima Woods of San Antonio, TX; his son, Derrick Woods, Jr. of Virginia Beach, VA; his older sisters, Tonya R. Lott (Tim) of San Antonio, Tx. and Michelle S. Woods (Gene) of San Antonio, Tx.; younger sister, Nicole E. Young (Quentin) of Hampton, GA; mother in law, Pamela Fatima Duncan of San Antonio, TX; and brother in-law, Reid Duncan, Jr. of San Antonio, TX. Derrick Woods, Sr. was a good God-fearing man and his warm positive spirit will forever be missed by so many.