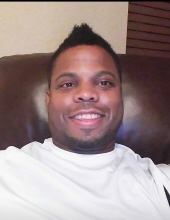 Dodrick Decaud Evans was born February 24, 1973 to Emma Williams. He transitioned from this life Wednesday, May 1st, 2019. Dodrick was born in Lubbock, Texas and later moved to San Antonio, TX. He was educated in the Northside Independent School System. At 17 years old Dodrick received his GED and later attended Northwest Vista College. Dodrick started his journey traveling the at a young age. Initially his travel was stateside, Austin, TX, Hawaii Los Angeles. His travel quickly turned international at 21 years old he took his first international trip to Spain and lived for a year and half. Most of his 20’s Dodrick lived internationally, Spain, Japan, and South Korea. During his time in Spain he attended Art School When he returned home, he began a head sculptor at a local manufacturing company. He began his sculpture career and eventually moved to Austin. Dodrick moved back to San Antonio where he became a Financial Advisor at USAA and was a top performer. He stayed at USAA many years before he moved back to Europe. After his second and final return to the states he began studying permaculture and became a permaculture teacher. He started a group in San Antonio called Sustainable Energy and Motion. This group continues today and has over 400 members. Dodrick leaves to cherish his memory, his Mother Emma Williams, siblings; Carla Thomas, Sharayah (Yancy) Stiggers. A host of nieces, nephews, cousins, friends and his spiritual families at Faith Based Institute Church in the Street of San Antonio, Texas and Jesus Church in Castroville, Texas.