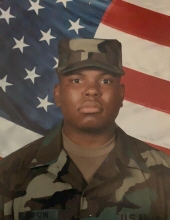 Donald Ray Hopson, 41, of San Antonio, passed Tuesday, February 4, 2020. Born in San Antonio, TX on December 24, 1978, he was the son of the late Yvonne Yolanda Hopson. He is preceded in death by his mother and sister, Cheryl Hopson. Donald was affectionately known as ‘Peewee’ by his family, but the impact he had to those who loved him was anything but small. He is survived by his wife Vuyen “Vicky” Hopson of 16 years; and leaves to cherish his memory his sons, Isaiah, Jaelin, and Kameron Hopson; sisters Tamika Young, Princess Brown and wife, Shekita Dews, Precious Jefferson and husband, Frederick Jefferson, Princess Hopson, Reberta Mack and brother, Thomas Hopson; uncles Allen and Robert Hopson; aunt, Marie Hopson and 9 nieces and nephews. Donald served in the US Army as an infantryman for 5 years and 8 months where he was stationed and trained in Panama, Hawaii, Japan, and South Carolina. Despite his travels, he often regarded his home state of Texas in all things he held dear to him. He took pride in his work and was diligent in pursuing whatever he would set his mind to. He had a no nonsense approach and stolid demeanor, a wicked and witty sense of humor, and was loyal to those he befriended. He loved his family dearly, his smiles and laughter were contagious, and his memory will always be treasured. Beloved husband, father, brother, and dear friend. His presence will be missed in our lives.