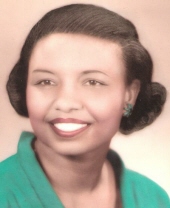 Sister Dorothy Mae Richardson Sutherland, a good and faithful child of God, was born on the 25th of June, 1928 in Pearsall, Texas, Frio County. She was the 7th child in a household of nine children born to Roy and Alberta Richardson. Dorothy attended elementary and secondary schools in Pearsall, Texas and completed her education in San Antonio, Texas at Phyllis Wheatley High School in 1949. Dorothy loved to dance which is how she met her husband of 52 years. Frank and Dorothy were married on May 17, 1953. To this union, three children were born: Cynthia Yates, Frankie Williams and Robert Sutherland. To know Dorothy was to love Dorothy. She accepted Christ at an early age and she was active member of Pilgrim Baptist Church. One of Dorothy’s favorite sayings was “Let nothing separate you from the Love of God”. Dorothy was one of God’s chosen people. She was a ruby in her husband’s crown, A Virtuous Woman, Mother, Grandmother, Aunt and friend. She was a proud yet humble member of East St. Matthews Baptist Church. She worked everywhere on God’s program in her evangelistic life. Dorothy and Frank moved to San Antonio to make a life for themselves. She attended Shaws Barber College in Houston, Texas. Dorothy returned to San Antonio to start her career as a barber and retired after 20 years due to health reasons. She is preceded in death by her beloved husband Frank G. Sutherland, her mother, father and five brothers. She leaves to cherish her memory her children: Cynthia Yates, Frankie Williams and Robert Sutherland of San Antonio, Texas; three sisters: Gladys Smith of Austin, Texas, Minnie Lee Richardson of San Antonio, Texas and Mary Adams of Houston, Texas; four grandchildren: Mary (James), Ebone, Tiffany and Sherrick; her lit’l great grandchildren: Javion–Jay and Faith (Sunbeam); her East St. Matthew family and a host of nieces, nephews, family and friends.