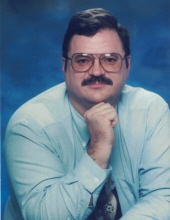 Edward was born in Harrisburg, PA to Alfred Leroy Gantt and Elizabeth Margaret (Hopkins) Gantt on March 28, 1954.He passed away on August 13, 2021 in San Antonio, TX.  Ed graduated from Robert E. Lee High School in San Antonio in 1972.  Following graduation he worked in grocery stores before moving to the Washington, DC area for several years.  Subsequently he worked for Harris Corp. in San Jose, CA and transferred to the San Antonio office as a quality control inspector and auditor. Ed enjoyed life.  HIs boisterous personality and loud belly laughs made him a perfect candidate to perform as a convincing Santa Clause for Christmas parties.  At work, he also dressed up in “shrek” green sweats to promote the company quality program as “Mr. PONC” (price of non-conformance).  His friendly demeanor, and his love of life, family and friends will never be forgotten. Ed was predeceased by his parents and older brother Charles.  He is survived by two brothers, Douglas Gantt of Gainesville, TX and Glenn Gantt of Rowlett, TX.  He is also survived by two nieces, Sr. M. Lucy Gantt, FSGM and Rebecca (Becky) Gantt as well as many, many friends. Interment will be in Shoops Cemetery, Harrisburg, PA at the convenience of the family.