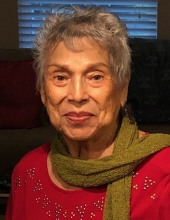 Esther M. Galindo has joined the Lord, her parents, brothers and sisters on Tuesday, September 3, 2019 at the age of 85 years. Esther was born in San Antonio, Texas March 10, 1934 to the late Carmen and Bernardo Martinez. She retired from Baxter Pharmaceutical after many years of dedicated service. On her off time she enjoyed cooking, dancing, gardening and watching her Novelas. Esther was a devout catholic and was a current member of Holy Name Catholic Church. She and her husband, Roland Galindo of 45 years enjoyed traveling and celebrating with family and friends. She is survived by her husband, Rolando Galindo; children, Yvonne “Suki” Guzman and her husband, Harold Guzman, and Arthur Galindo; grandchildren, Christopher Guzman and his wife, Susan, Nicole West and her husband, John, and Lauren Galindo; great-grandchildren, Siena Guzman, Sean Guzman, Jack West, and Alexander West; brother, John Albert Martinez and his wife, Celia; also with numerous nieces and nephews.